Non-Surgical weight loss – the best of the studies

Home / Non-Surgical weight loss – the best of the studies

<![CDATA[Sometimes I encounter physicians or others in health care who still over-estimate the risks of modern weight-loss surgery (Zero mortality risk in over 1,800 consecutive cases, lower risks in northern Nevada than C section and joint surgery), and considerably over-estimate the possible success of non-surgical weight loss treatment. So what does the real published research tell us about non-surgical weight-loss programs including diet, counseling, exercise, medications, meal replacements and combined intensive therapies? Well, let’s look at a large meta-analysis of the question published in the American Journal of Clinical Nutrition. 29 total studies in the nine states were examined. Eight studies at four or five year follow up data for a total of 448 subjects with this type of longer-term follow up. On average each program involved a 19 week structured program. Some of these programs involved what is called a very low calorie diet (VLCD) or a very low energy diet (VLED), and they have proved to be the most successful. These diets generally involve intake of less than 800 kcal per day. <img class="alignright wp-image-4855" src="https://nevadasurgical.com/wp-content/uploads/non-surgical-weight-loss.png" alt="" width="525" height="394" /> The study concludes that 3% of body weight was lost at 2-5 years compared to before the program. The meta-analysis does not take into account the weight of the study subjects who did not continue with followup, a likely source of bias that tends to exaggerate the success of the programs. It also does not take into account what is often called “publication bias”, the phenomenon in which studies are submitted and accepted for publication much more often when they show a positive effect that we all want to see happen.  Despite these and other biases, the best of the studies result in this rather modest weight loss. In another large meta-analysis published in the Journal of The American Dietetic Association involving over 80 studies the amount of weight that was ultimately lost was around 3 to 6 kg at the four-year mark. The same biases that would tend to exaggerate the true effect were of course still present and unaddressed. 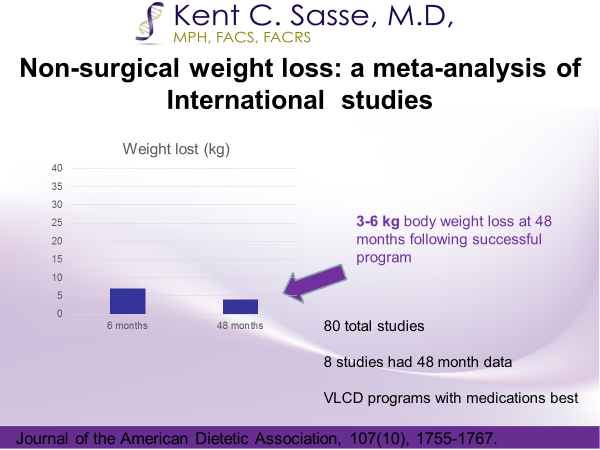 So is a 6 kg weight loss significant to the average person trying to lose weight? Most of my patients would tell me that it is barely significant.  While every single pound helps the cause, helps one’s energy level and health, a great many millions of people are struggling and in desperate need of shedding 100 or more pounds. So losing six or 10 or even 12 pounds, while helpful, is not enough.   And then there is the challenging question of whether these studies, despite all their fancy statistics in prestigious journals, represent the truth about non-surgical weight-loss. One reads them with a certain gnawing skepticism that the dwindling numbers of study subjects who are followed beyond one or two years means that the study authors are only reporting upon those patients who choose to continue participating over the longer-term. And by selectively reporting only the fraction of people who stick with a program of intensive weight reduction, the studies may in fact be reporting only a biased result of the most successfully participants. What do we supposed has taken place with the weight among the study subjects that started on day one but were lost to follow up after year one? We can look to other larger, less biased studies to give the answer that we most probably already suspect. They have very likely not lost weight or have regained wait that was initially lost. Let’s take a look at one of the largest studies that is more population-based, conducted outside the United States over a 15 year time period. Many have argued that this type of study represents a less biased reporting of what happens among people who try to lose weight with and without surgery over 15 years. As we can see from the Swedish Obesity Subjects Study, one of the best long range studies comparing medical management and surgical treatment, the individuals in the blue line undergoing medical, non-surgical weight-loss efforts gained weight slowly over the first ten years and then lost a few pounds in the last years of the study. These findings are likely to be more realistic than studies published on individual trials of medical weight-loss programs.

Today, we have a highly effective and safe tool that results in dramatic and long term weight loss with risks far lower than those of continuing to suffer with obesity: the laparoscopic sleeve procedure. While we employ every method of weight loss assistance, including emphasis on diet, exercise, counseling, behavior modification, medications and support groups, we know the most effective treatment is a 45-minute surgical procedure. 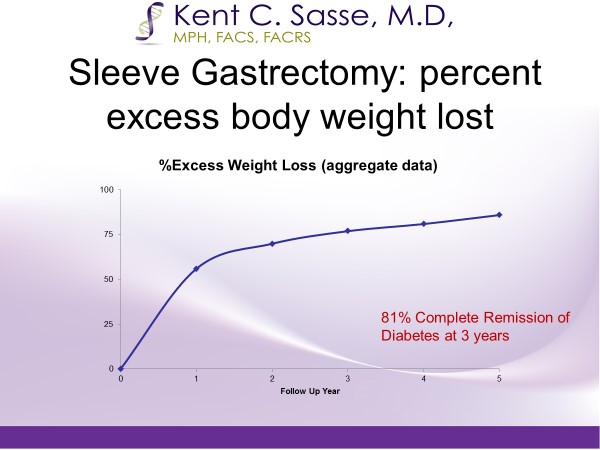