Why the Medical Management of Obesity Isn’t Enough

Home / Why the Medical Management of Obesity Isn’t Enough 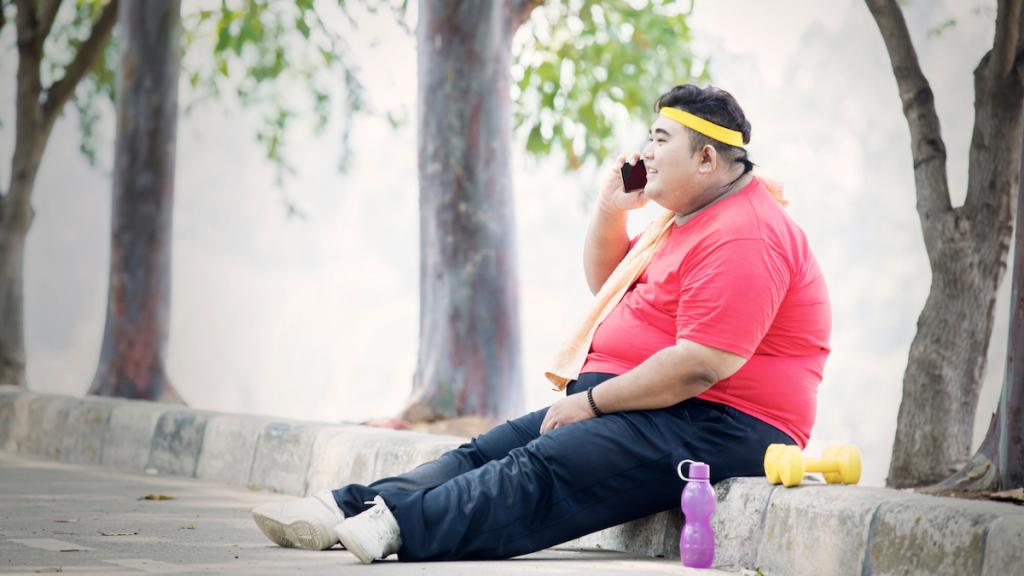 Diet and exercise are enough when you do them right—or so we are told. Just mind your diet and exercise, right? This is something we’ve heard since childhood. And how could such straightforward, commonsense advice possibly be wrong? Unfortunately, it’s the wrong strategy for treating obesity. Here’s why the medical management of obesity isn’t nearly enough.

Let us start by acknowledging that the advice was probably right 60 years ago before the widespread changes in our environment that caused the obesity epidemic. The advice may have worked before widespread use of antibiotics in agriculture, before the profound change in the genomes of every common food staple that we consume, and before potent, obesogenic pharmaceuticals became so omnipresent, to name a few key culprits. It turns out that we are beautifully designed to maintain weight, and increase weight, even in the face of adversity and food scarcity. What we were not designed for is a very rapid change in all the environmental inputs that interact with that delicate genetic metabolic machinery that governs body weight, plus a food surplus.

Sound strange? Just think about the time scale for evolution of human body functions, especially something as complex as energy metabolism. We are talking tens to hundreds of thousands of years for adaptations to take place based upon interactions with the environment. Now, think of the time scale of the change in agriculture, pharmaceuticals and food production practices which have, in a few decades, introduced huge chemical changes in the substrates that our body must now process.

The result is a massive upsurge in obesity over an amazingly short period of time—just a few decades. We are simply not biologically equipped to combat this devastating environmental onslaught.

What the Data Shows

Now let us get to the peer-reviewed, scientifically rigorous data about diet and exercise for people with obesity. The surprising but unambiguous conclusion is that such programs do not work. It is not to say that people do not lose weight in the short term. In fact, programs of diet, exercise, counseling, motivation, and even medications, usually result in weight loss in the first six or twelve months. Just look at the Biggest Loser television show, and you might say that the program “works,” at least for a little while. But when we widen our gaze to a more meaningful timeframe, let us say two years or more, those same programs curiously now fail to report their results at all to the same peer-reviewed journals. And when they do, the results are discouraging, which no significant weight loss at all, according to the largest and most honest, well conducted studies and published meta-analyses that aggregate data across studies. Even all the contestants on the Biggest Loser regained their weight after two years, according to the one rigorous study conducted by the National Institutes of Health. Only one of that year’s contestants managed to keep his weight off, Rudy Pauls, the gentleman who had weight-loss surgery after the pounds started creeping back on.

If that were not bad enough, the well-designed studies show how harmful a diet-and-exercise-only strategy is when it means putting your head in the sand about the benefit of surgery. Overweight and obese individuals are a whopping seven times more likely to develop type 2 diabetes when they choose to avoid surgery, as the following study from the Journal of American Medical Association shows: 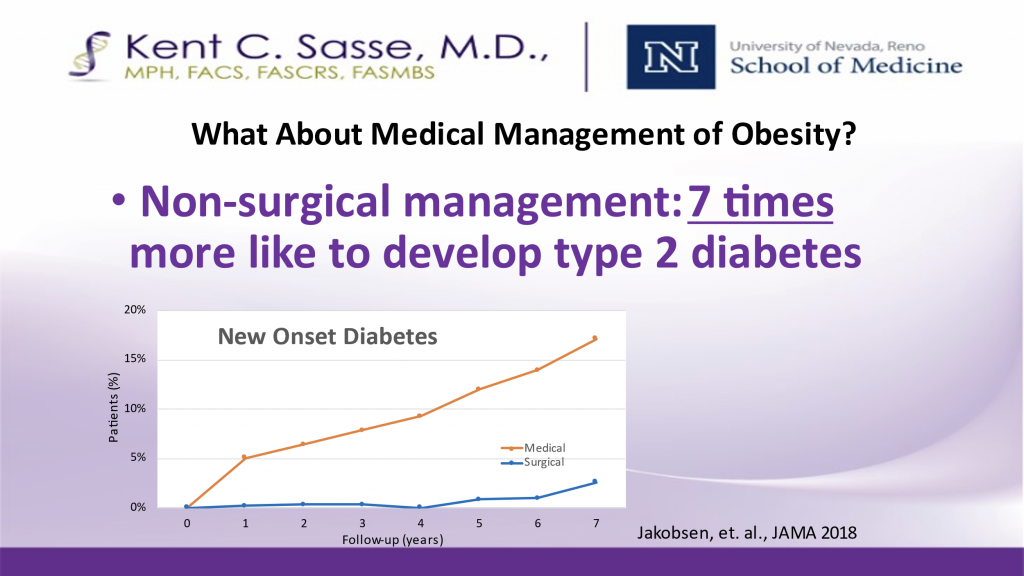 It is not to say that we pay no attention to diet and exercise. Our mantra, “surgical technology plus exercise,” emphasizes surgery as the cornerstone of therapy because there is a mountain of rigorous peer reviewed literature demonstrating long-term success lasting decades after surgery. It is not perfect; we still need better tools, better science, and especially better prevention before we are really going to overcome this scourge of the obesity epidemic. We are huge believers in exercise, especially the kind that people add into their daily routine seven days a week, such as a nice, long daily walk. We think, although it is quite difficult to prove with rigorous science, that our efforts to convince people to reduce carbohydrates and processed foods while increasing daily exercise, will help them maintain the weight they have lost after surgery. It also benefits mental and physical health in other ways that are not measured in pounds.

But as far as advising an adult with 60 or 100+ extra pounds on board that they should just treat the problem with only diet and exercise, that’s just malpractice, from a peer-reviewed, published-data point of view. The wishful thinking that uses 60 year old advice and ignores both the published science and profound change in our environment is like telling someone with a brain tumor that they can resolve it by doing crossword puzzles. Lastly, it is always good to do the common sense check. Look around—there are millions of diet-and-exercises programs. Is the obesity epidemic getting better or worse?

If you’d like to learn more about metabolic surgery and whether you’re a candidate, contact the Nevada Surgical team today.